The three sisters companion planting as seen in the Americas by tradition and now used widely sees the corn grown with beans and squash for mutual benefit.

This year, due in part to the lack of water available, we have grown corn and squash ( mainly zuchinni) in the mandala beds.
The beds are planted out with plenty of the fast growing greens such as bok choi and lettuce while the corn and squash is young. The plants do provide some shade for the lettuce from summer Sun. So as part of the normal rotation in the mandala garden we plant corn and squash on south and west sides of the bed and towards the centre.

Back to the three sisters - the mutual benifits come from all directions as the three interplay in each others growing season. The corn benifits from the squash because of the shade the squash throws on the soil and preserves water which corn needs in abundance. The corn is a gross feeder and benifits fron the legumous beans to some extent but the biggest advantage is that the bean weaves support for the corn as it climbes and resistance to strong winds develops. The bean gets a stalk to climb on and shaded soil too.

We like to use purple king beans and yellow zuchinni or squash to make picking easier.

We have tried several combinations with cucumber and butternuts used and have had a few surprises when squash has outgrown the greens and are trying a plantout of squash seedling after the lettuce and greens are harvested.

Thank you to the first Americans for this valuable design tool!
Posted by purplepear at 4:21 PM 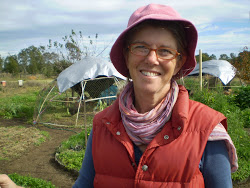